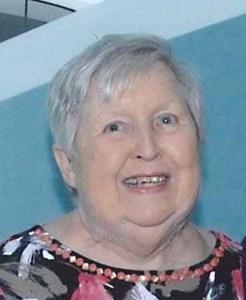 Patricia E Jareckas, age 77, of Cape Canaveral, Florida passed away on Thursday, January 16, 2020 at Cornerstone Hospice in Orlando. Patricia was born in Chicago, IL to William and Elizabeth Burns. She married her husband, Lawrence in April 1964 and they moved to Cocoa Beach in 1995 and then to Cape Canaveral where they were still living at the time of her death. She worked part time at the Publix at Banana River Square in Cocoa Beach and loved going on cruises with her family and spending time with her two dogs: Baby and Tazzie.

There will be a Mass of Christian Burial celebrated at Church of Our Saviour, 5301 N Atlantic Ave, Cocoa Beach on Tuesday, (1/21) at 10:30 AM. The family is requesting no flowers and suggest, to those who wish, memorial donations to a charity in her memory.